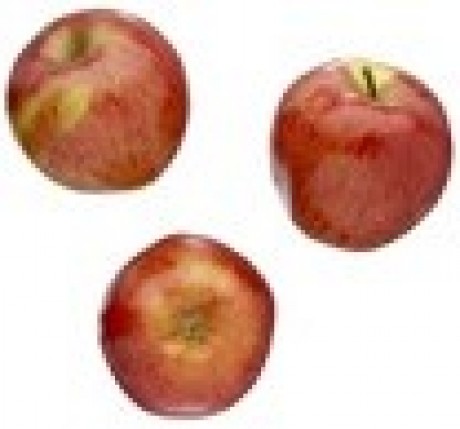 A deciduous tree belonging to the rose family. Derived from Malus sieversii. Originated from Central Asian around the north-west of China and Kazakhstan.

Good quality product will be firm with smooth, clean skin. Avoid fruit with any bruises or blemishes, which will result in decay spots. Flavour depends on maturity. If picked immature, there will be less colour and flavour. Over-mature fruit will be mealy and lack the crunch of a firm apple.

Tart varieties (high or medium acid) with a firm texture are best for cooking. Less acidic, sweeter varieties are generally are preferred for platters, fruit salads and fresh eating.

Temperature is the single most important factor limiting the growth of apples. Apples are temperate-zone crops that grow most successfully where winter temperatures are of 7°C or below. If the winter is too mild, the flower buds open over a long period in the spring, which leads to poor growth and cropping.

The amount and quality of sunshine are important in apple colour formation. Good soil drainage is essential for apple tree growth as too much water reduces the oxygen available for root growth.

The original home of the apple is not known, but most historians believe it to have been in the region of the Caspian Sea. The wild apples of prehistoric time were quite different from those we know today - probably only 2-5cm in diameter and very bitter. Cultivation probably started with the beginning of agriculture in Europe, and documents record methods of cultivation as far back as 2000 years ago.

In Australia, the settlers who arrived with Governor Phillip with the First Fleet in 1788 planted the first apples. Early in the 19th century, large areas were planted with fruit trees, including apple trees to the south and west of Sydney. At this time John Pascoe Fawkner established a fruit tree nursery in Launceston, Tasmania and apple trees from this nursery were taken to Portland, Victoria, in 1834 and to Melbourne in 1837.

Apples, known together with pears as Pome fruits, were first planted in the Stanthorpe area about 1873.

Among the few Australian fruit varieties of commercial importance, Granny Smith is now one of the major apple varieties known the world over. It originated in the garden of Mrs Maria Ann Smith, in Eastwood, Sydney in about 1868.
Another famous Australian bred variety is Pink Lady, bred in WA by the Department of Agriculture.