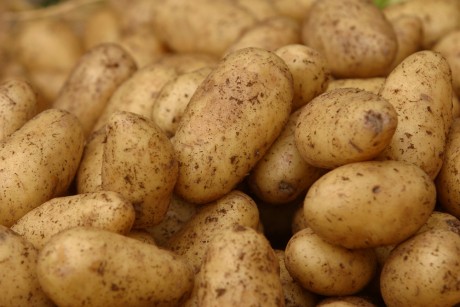 Choose potatoes, which are free from cuts and bruises, green colouring and shoots or eyes.  Greening may occur in the harvesting area, the marketplace, the retail store, and the home.

Potatoes are easily prepared as generally there is no need to peel, just gently scrub with a pot scourer or small brush and remove the eyes with a knife.  Use whole, sliced or diced as desired. Because of their delicate, universally adaptable flavour, potatoes may be used frequently in meals without objectionable monotony.  They may be served baked, roasted, boiled, chipped and scalloped; used in salads, stews or soup.  Slice and bake in milk and butter, topped with grated cheese, or slice or dice into pies and quiches.  Potatoes can be mashed and used in potato cakes, scones and breads.  Those with a high moisture content are best suited to boiling and in salads.  Drier fleshed varieties make excellent baked, roast or mashed potatoes and are ideal for chips.

The bud piece of the tuber is cut from the potato and planted by machine between February and July.  Then, during the next three to four months, the soil is turned, weeds are killed and the grower makes sure the tubers growing on the roots are covered by soil.  The potato is a cool weather crop, but cannot tolerate much frost.  Well distributed, moderate rainfall or irrigation is needed.  A heavy, well-drained loam, made up of clay, sand and decayed vegetable matter, is the best soil for healthy crops.  The potato plant also requires lots of light because the amount of sunlight the plant receives determines to a great extent, the rate of photosynthesis and the amount of carbohydrate available for growth of the tuber.

The potato is a member of the nightshade family, Solanaceae.  The name is thought to have come from the Spanish word “patata” or”batata”, which was applied to sweet potatoes and, by mistake to the white potato.  It is generally accepted that the potato, now commonly grown throughout the world, had its origin in the Andes of Bolivia and Peru in South America.  Potatoes appear to have been cultivated long before the first explorers landed in America.

While little is known of the history of the potato prior to this, Peruvian pottery shows representations of the potato as a cultivated plant at least as early as the second century A.D.  The tubers were probably in use for centuries before this.  Between 1550 and 1570, potatoes were introduced into Spain, and about 1590 into England and then Ireland.  From England, the potato also spread to the British colonies, being introduced into Australia by the first free settlers.

Potatoes are an excellent source of vitamin C and dietary fibre, a useful source of potassium, magnesium, niacin and thiamine. 265kJ/100g.

Store in a cool, dry, dark place not in refrigerated storage.

When purchasing washed potatoes, be sure to keep them away from any light as the removal of soil from potatoes exposes the skin to light and makes the potatoes more susceptible to greening. Exposure to light also encourage sprouting.

Store in a cool, dry, dark place, not in the refrigerator. Keep away from light, as it will cause greening and sprouting.